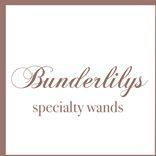 By Bunderlilys, July 24 in Ollivanders