Random School Stuff - We are tasked to make an informative speech about a topic we are interested in. 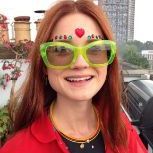 By Deinerie,
October 15 in The Forbidden Forest

Top Posters In This Topic

Alright, this is like a task from our English teacher in our school. We are tasked to make an informative speech about a topic we are interested in, and I can't pick between animals, colors, music or

I would really appreciate it if you suggest anything hehe.

You could talk about how and if the WizardingWorld has helped you? Maybe you've gone through something and the books have helped. Or, you could speak about the world that she created and the amou